For the first transit of Venus to be seen in modern times, i was fortunate enough to be a guest of Sir Patrick Moore, at his observatories in Selsey, West Sussex, UK. After filming "The Sky at Night" with Patrick, and Dr's Allan Chapman and Fred Taylor earlier that week, i returned to Patrick's the day before the transit, with friend and astronomer David Tyler with out equipment. Others also gathered at Patrick's home, including "Queen Legend" Brian May (also a keen astronomer for many years.)

We were graced with perfect weather at Selsey throughout the event, with clear skies, and steady seeing. It was a wonderful, and historic event, and a day i shall never forget both for the Transit itself, and the company of those i spent the day with. My Thanks to Patrick Moore, Jane Fletcher, Chris Lintott for making this event possible, and to Martin Mobberley and Jamie Cooper who provided many of these photographs. 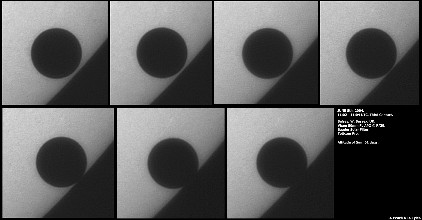 Venus exits the Solar disk. The montage shows the end of the transit of Venus. It will again cross the face of the Sun in 2012, however the next one will not be well seen from the UK, so we were very fortunate in our views of the event from Selsey in 2004. 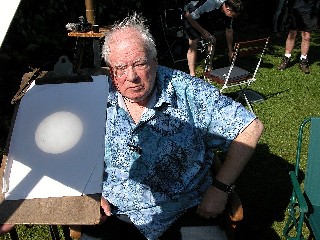 An Historic Moment. The transit of Venus was the only major astronomical event Patrick had not seen in his 70yrs as an astronomer. Martin Mobberley captured this great photograph of Patrick, with the solar disk being projected through his 3 inch refractor onto white card. 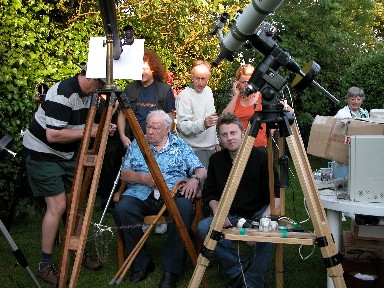 A busy morning!. The observing site during the transit was crowded with photographers, and film crews. A live BBC link-up with the national news will filmed during the event. Above from front to rear, are Patrick Moore, Myself, Brian May, Cameraman David Evans, and Producer Jane Fletcher. 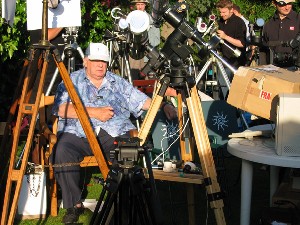 Sunrise - June 8th, 2004. We all arose between 4-5am, and gathered outside Patrick's observatoies to await first conact. Weather was perfect, with 100% clear sky, and no wind. Above, Patrick awaits first contact, using his very first telescope - a 3 inch refractor which is still in excellent working condition. 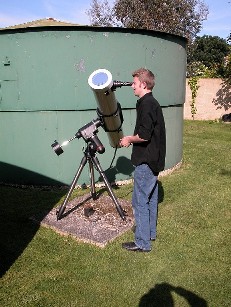 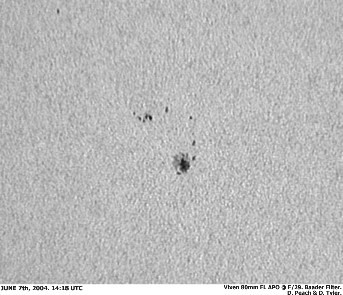 Solar observing on June 7th. We took the evening before to set-up our telescopes and equipment, and catch some nice view of the Sun that afternoon. Above is a shot of Myself observing through Jamie Cooper's Intes 7" F/8 Maksutov Newtonian outside the dome of Patrick's 15" scope. This telescope gave the finest views of any telescope present of the Transit in periods of good seeing.

The image at left shows the only spot group present on the Solar disk that afternoon, which was well away from the transit path, so prospects for Venus moving close to any sunspots was unfortunately very slim. 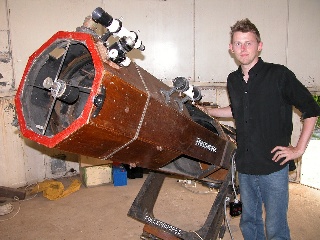 Patrick Moore's 15inch F/6.2 Newtonian. This telescope was used by Patrick more for more than 25yrs as his primary Planetary observing telescope, through which, many of his drawings were made. It was made by Fullerscopes, and features a rotating front end for comfotable eyepiece positioning. I was fortunate to observe Mars through this telescope about 10 months earlier. Photo M. Mobberley. 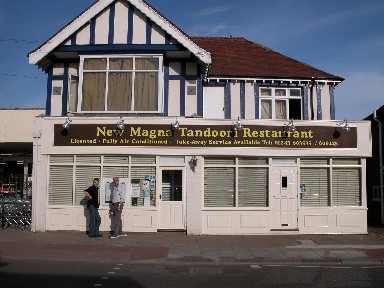 An evening gathering. The evening before the transit we all gathered at the New Magna Tandoori Restaurant near Patrick's home in Selsey, where a great time was enjoyed by all present. A beautifully clear summer evening, showed great promise for the following mornings event. David Tyler and Myself browse the Menu above.  Photo M. Mobberley.