On the weekend of March 11-13th, 2005, a star party event was held at the home of Sir Patrick Moore. The event was also filmed as part of a Sky at Night program, and this was the first such Star Party in well over 600 programs during the last 49yrs. Many of the UK's foremost astronomers attended the event.

As with the Venus Transit, we had excellent weather during the weekend, with both nights being clear (though the first night clouded over around midnight.) The second night was excellent almost from the start with excellent transparency, and good seeing. Interesting events were seen, such as Venus in the evening twilight, a bright Iridium flare, and the International Space Station passing over. Excellent viewing was also had of many deep sky objects, as well as Jupiter and Saturn.

My thanks to Martin Mobberley, and Pete Lawrence for providing these photographs. 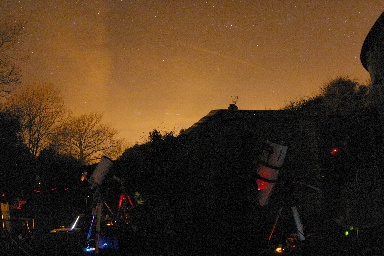 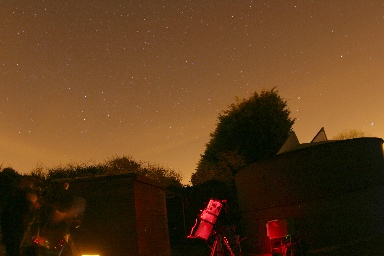 These night time photographs show the scene across Patrick's garden during the nights observing. Glows from laptops, cameras and telescopes can be seen, with the stars of Cassiopea and Perseus above Patrick's house in the background. Despite the skyglow, to the naked eye, skies were very dark, especially looking South over the sea. Photos Pete Lawrence. 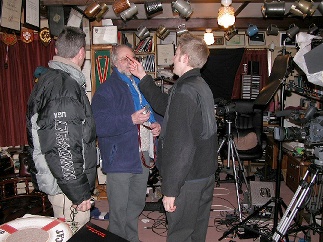 Many parts of the program are actually filmed in Patrick's study. Here Bruce Kingsley, David Tyler and Myself discuss the nights observing, surrounded by lights and cameras. Photo Martin Mobberley. 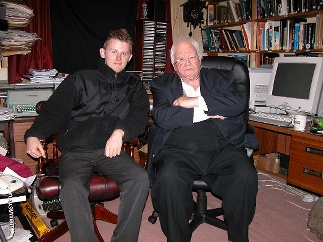 During my stay at Selsey, i again had chance to talk with Patrick in his study. He has many fascinating stories of his experiences throughout his life, that include meeting Orville Wright (of the Wright Brothers) and playing a piano/violin duet with Albert Einstien. However, one of his most memorable and hilarious stories, is the time he was driving up a hill not far from Selsey, in his old Ford Prefect (which has covered 700,000 miles in its life!) - when he was overtaken by a dog!. Thankfully the motor car has come along since then :-). Photo Martin Mobberley. 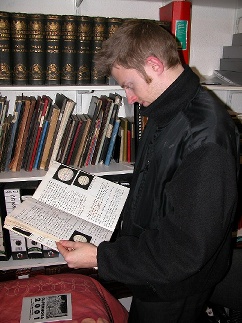 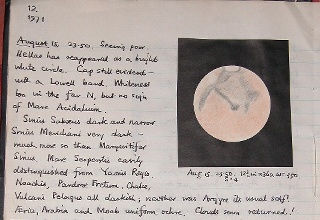 With a lifetime of observing to his name, Patrick has an extensive collection of books on Astronomy (many written by himself.) However, some of the most fascinating books that can be found are his own observing logs, which cover some 60yrs of active observing of all manner of objects (though primarily the Moon and major Planets.) Here i am browsing through one of Patrick's many observing logs of Jupiter. His drawing skill and accuracy of recording observations and transits of features are quite remarkable, and his records are fascinating to read through. At right, is an excerpt from his Mars observing logs - this one from the 1971 apparition. Photo Martin Mobberley. 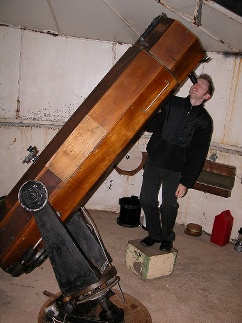 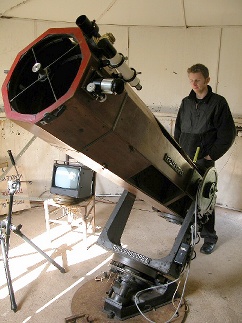 Observing Saturn through the 15" F/6 Newtonian.

During the weekend i took plenty of opportunity to observe Saturn through Patrick's 15" F/6 Newtonian which still today provides fine views. This telescope has been in use by Patrick since the 1960s, and much of his Planetary work has been done with this instrument. A lovely drawing of Saturn made through this telescope by the late Paul Doherty hangs in Patrick's study and is one of the finest visual drawings of the Planet i have ever seen. At right the telescope during the daytime. It is mounted on a large fork, and can be easily pointed anywhere for such a large instrument.  Photo Martin Mobberley. 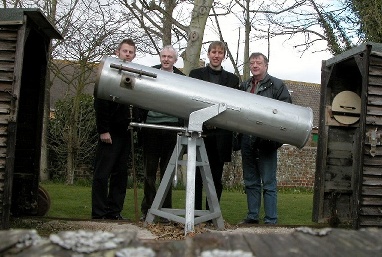 Here a group of use pose for a photograph alongside Patrick's historic 12" F/6 Newtonian. This telescope is over 50yrs old, and was used by Patrick for much of his groundbreaking lunar mapping work. He also used the telescope for much of his Planetary work during his long observing career. From Left, Myself, Martin Mobberley, Chris Lintott, and Tom Boles. Photo Martin Mobberley.