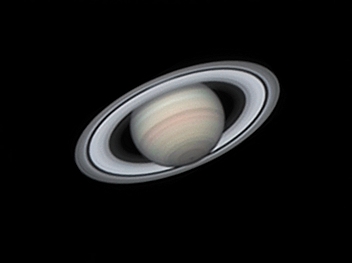 The 2002-03 apparition of Saturn turned out to be one of the most active in several years, as well as the Earth  finally reaching its maximum angle south of the Saturnian ring plane, giving northern hemisphere observers there best view of the Planet, and its ring system since the 1970s. This report gives a rundown on what was witnessed by observers during the apparition, and the several interesting events that occurred. My thanks to Ed Grafton, Don Parker, Gu Yu and the IOPW  whose images have been used to illustrate this report where appropriate, and would not have been possible without.

The first high resolution observations and images of the Planet were received by Jesus R. Sanchez on September 13th. Two weeks later, Ed Grafton imaged the Planet (Sep 29th) and his images showed a small, but distinct white spot in the Planet's South Tropical Zone. This spot was followed with the rotation of the Planet, and hence was confirmed a real feature. This was to be the begining of a whole series of these spots to be followed across the following 6 months. 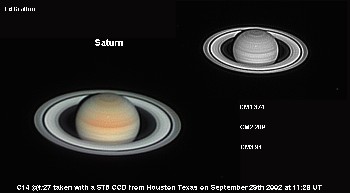 The spot was again recovered on Oct 4th, by Don Parker though under poor seeing. Again on Oct 7th, Ed Grafton obtained further images of the feature under excellent seeing conditions, and also detected other low contrast spots in the Planet's SEB. 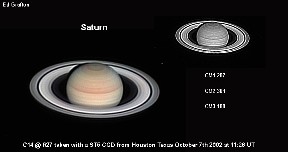 Don Parker then obtained further images of the spot on October 8th and 12th, as well as recovering the small mid-SEB spots. This allowed drift rates to be determined for these features. The small STrZ bright spot showed almost no drift relative to System III, while the fainter mid-SEB spots showed a rapidly prograding drift, as easily illustrated in the animation below, from Parker's Oct 12th images. The Oct 12th images were the last to show this spot, having faded from view soon after, as confirmed in later imagery. 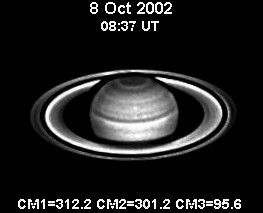 An image showing the static drift of the STrZ spot, and the fast prograding drift of the mid-SEB spots. Image centred at ~95 deg Sys III. Courtesy Don Parker.

Damian Peach then began his imaging program from Tenerife, Canary Islands on October 16th, and produced high resolution images of the STrZ spot longitude on October 22nd, and confirmed the feature had indeed faded. Also, a green coloration to the Planet's southern regions was imaged, and further confirmed in Green Light images by Peach on Oct 27th and 31st, and can also be traced back further in images by Parker at the beginning of the month. 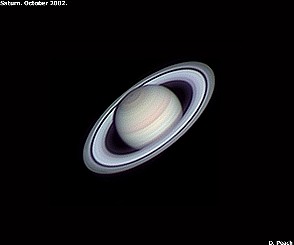 This image on October 22nd, confirmed the fading of the small STrZ spot discovered on Sep 29th, and also shows an interesting Green coloration across the Southern most regions. Image, Damian Peach.

Images during November were more prolific, and further interesting spot activity was noted during the month. It began on Nov 12th, when Peach discovered a small white spot in the mid-SEB, which was confirmed by Grafton 2 days later. This spot was not observed again after November 14th. 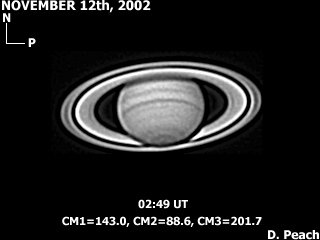 Peach, observing under mediocre seeing on Nov 19th, recorded another small white spot in the STrZ in CCD images. This was confirmed again by Grafton the following day, and re-imaged by Peach on Nov 22nd. The spot was then again imaged, this time by Dr. Jean Lecacheux using the 1 metre telescope, at the Pic du Midi observatory on the 25th. The spots determined drift rate from all the observations was +0.3 degs/day vs Sys III - almost identical to the spot discovered back on Sep 29th. 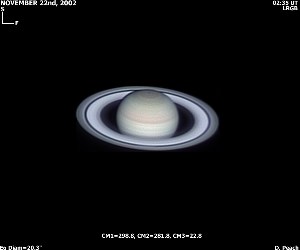 Just one day after this spot was discovered, Mr. Gu Yu, observing from the USA, imaged another small spot in the STrZ, though this one was rather fainter than the others. It was confirmed by Grafton two days later, after which it disappeared. It is likely the spot was discovered as it was fading.

The second STrZ spot discovered in as many days!. This image by Mr. Gu Yu on Nov 20th, shows the faint spot, visible in all four images. Image courtesy Gu Yu.

December was probably the most active month of Saturn observation for both amateur and professional astronomers. The Hubble Space Telescope was employed for a series of observing runs during on the 9th, 14th, 16th, 17th-18th.

The first half of the month was rather quiet, but on Dec 15th Peach imaged a storm rotating across the Equatorial Zone, though no new STrZ spots had been recorded at this time. But, a few days later, Peach imaged the Planet on Dec 18th, and found another small white STrZ spot. This spot was also imaged by HST during one of its imaging runs just the day before. This storm was to become the longest lived of them all, lasting late into January 2003. 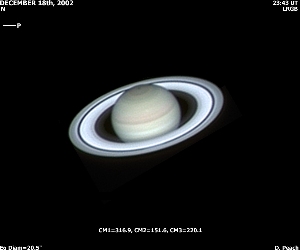 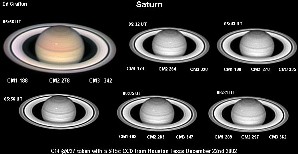 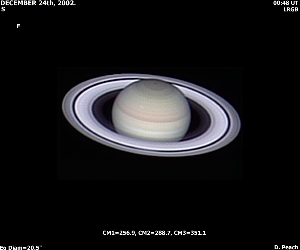 As mentioned above this storm from Dec 18th persisted until the end of January, as a small spot was clearly recorded close to its position as late as images by Peach on January 28th (well corresponding with the observed drift of ~+15 degs/month vs Sys III.) This is the only spot to have been observed visually, by Don Parker on January 7th, proving it was possible to see these features in larger amateur scopes. No other spot outbreaks were recorded after this January spot, and the remainder of the apparition was quiet, though less observations was obtained after opposition.

At the end of March the Earth finally reached its maximum angle South of the ring plane, presenting us with the finest view of Saturn's southern hemisphere since 1974. 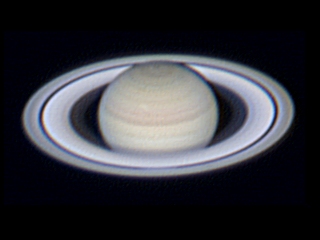 This image on January 4th, 2003 clearly shows the last spot of the apparition, discovered back on Dec 29th by Grafton. Image D. Peach.

Summary of the Activity.

In total, 5 small storms were discovered in Saturn's South Tropical Zone during 2002-03, all exhibiting the same appearance, and observed drift rates (+15 degrees/month vs Sys III.) High resolution images by HST showed these storms in good detail, and they appeared to be small eruptive cyclonic storms. This apparition was the first time so many of these features were recorded, though they have been followed in past HST images, and even some of the past Voyager images show similar storms. The last such storm of this kind recorded by amateur observers was back in Dec 2000, by Maurizio di Sciullo and Don Parker.

Below is a short list of the South Tropical Zone storms, and those whose observed them: 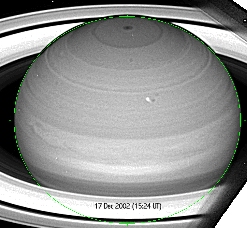 This image obtained by HST on Dec 17th, 2002 clearly shows one of the small STrZ storms. This particular storm is the one imaged by Peach on Dec 18th, and Grafton on Dec 29th. Image courtesy A. Sanchez-Lavega IOPW.

In all 2002-03 proved to be the most active an interesting apparition since at least 1997. Some have speculated this increase in activity perhaps indicates an increase in activity on the Planet, now the Southern hemisphere is pointed at its maximum tilt sunward. Only time and the continued imaging work of the amateur community can provide answers to these questions, and let us hope the 2003-04 apparition will provide us with as much activity as this apparition has done.