I was fortunate enough to spend the week of the great opposition of Mars in August 2003 at the Observatory Roque de los Muchachos (ORM) on La Palma in the Canary Islands. This site is among the worlds finest for its "astroclimate" with superb transparency, and steady seeing for much of the year. The observatory site lies at 28N, 17W and is 2426m above sea level.

I travelled to the island with a BBC Television crew, where we filmed an ambitious live program, which was broadcast live in the UK called "The All Night Star Party". I provided live, and later high resolution processed images of Mars for the program, and also explained the features we saw, and how to obtain images. I was also fortunate to have an excellent site on the roof of the 2.5 metre Issac Newton Telescope from where i spent three nights imaging the Planet under good seeing.

My observing colleague throughout was ING engineer John Mills, who has worked at the observatory for many years. His guidance and hospitality made the trip possible, and the whole event was a very memorable one. My thanks to John Mills, and Dr. Chris Riley for providing some of the photographs presented here, and also to Robert Dalby for his help and advice. 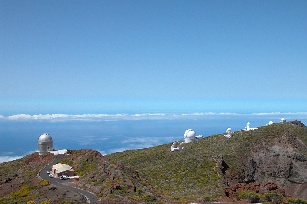 The Roque de los Muchachos Observatory. The Fuente Nueva peak on La Palma. The site (at 2360m) lies high above the clouds, and the convex shape of the mountain is a major factor in the superb seeing conditions that prevail for much of the year there. 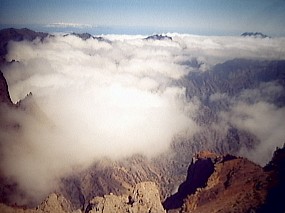 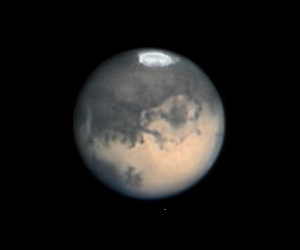 A Grand Sight. The above image of Mars was obtained during a period of good seeing from the observatory on August 22nd, 2004, approaching its closet opposition to the Earth in 60,000yrs. The "eye of Mars" Solis Lacus can be seen, along with the winding Valles Marineris Canyon, and a brilliant South Polar Cap. Image Damian Peach/John Mills. 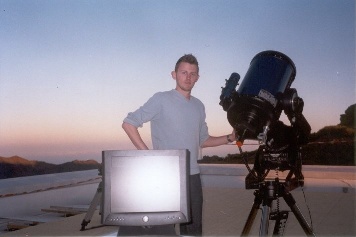 The Observing Begins. A photo of myself next to the Meade 10" Schmidt Cassegrain that was used for all observations and images. The telescope was mounted on a large wooden platform, with superb views of almost the entire sky, with the added benefit of being sheltered from the often present winds at the observatory. 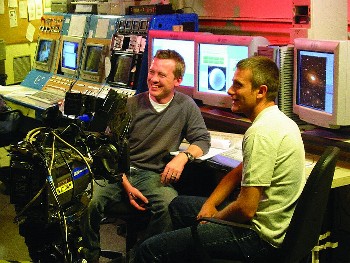 Filming inside the INT. This photo shows presenter Chris Riley, and Astronomer Romano Corradi in the control room of the Issac Newton Telescope. It was quite remarkable to watch the incredible live  images of objects such as M27 appear on screen taken by the 2.5m INT. 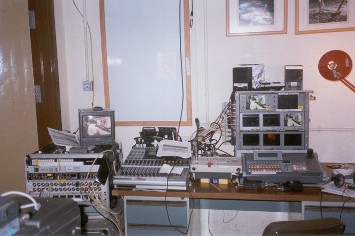 The Program Control Center. It was from this room, that the entire program was directed, by program director Martin Mortimore. During filming it was surely the busiest place in the whole observatory!. 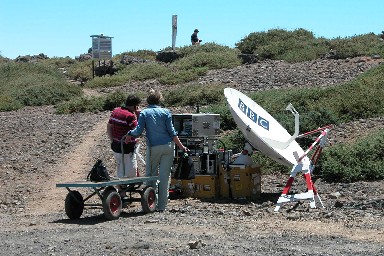 Calling Home. The only way to transmit from the remote mountain top site, was by the use of a satellite link-up seen here. 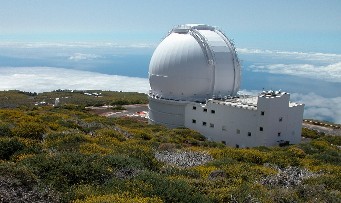 The William Herchel Telescope (WHT.) AT the time of visiting was the largest telescope in operation at the observatory. It is a 4.2m (165inch) aperture, equipped with an adaptive optics system. 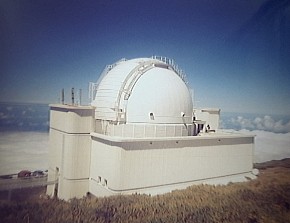 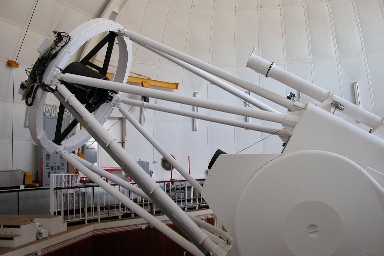 The Issac Newton Telescope (INT). The INT is a 2.54metre (100inch) telescope operated by the Particle Physics and Astronomy Research Council (PPARC) of the United Kingdom, the Nederlandse Organisatie voor Wetenschappelijk Onderzoek (NWO) of the Netherlands, and the Instituto de Astrofísica de Canarias (IAC) The telescope weighs over 100 tonnes. The mirror was made by Comings (USA) as an experimental casting for the 200-inch mirror of the Mount Palomar telescope. The optical surface was ground and polished to the required optical figure by the manufacturers of the telescope, Sir Howard Grubb Parsons Ltd of Newcastle. The telscope was once loacted at Herstmonceux, in the southern UK, but later moved to La Palma for the vastly superior sky quality. 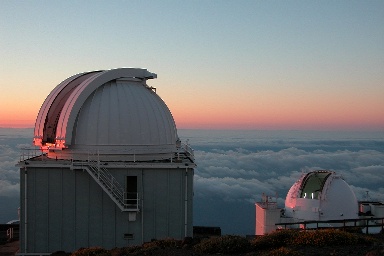 The Jacobus Kaptyen and Issac Newton Telescopes. Two of the most famous telescopes at the observatory are the 1.5m JKT and 2.5m INT, seen here at sunset. 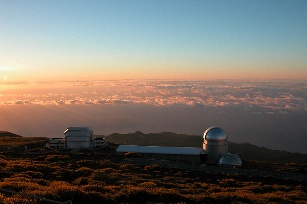