In this section you'll find images of some of the most energetic events that occur in the universe, At any one time there are often many Supernovae within reach of amateur telescopes and many are discovered by amateurs. Below you'll find images of such events both past and present. All dates can be found in the file names themselves and on the images. 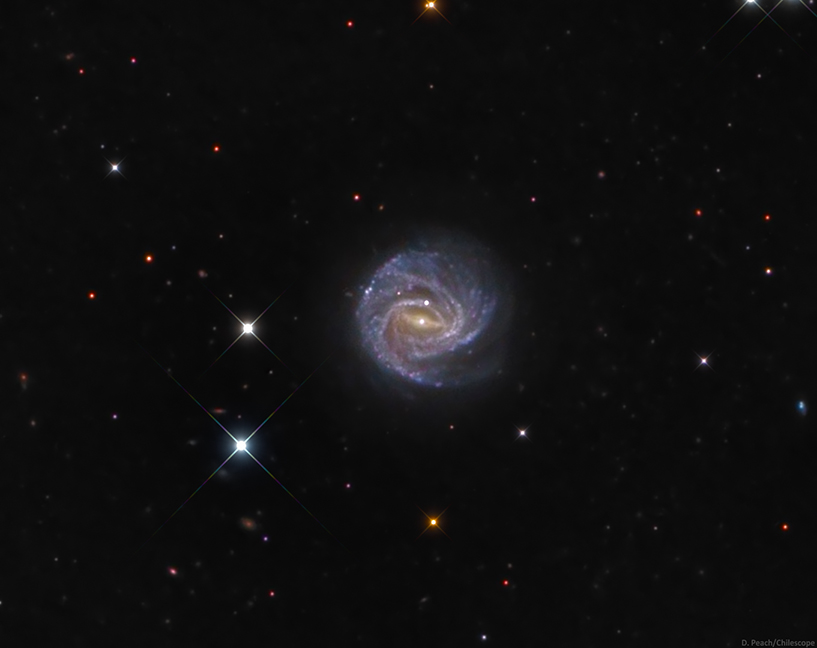 The small spiral galaxy NGC 3367 is located around 120 million light years away in the constellation Leo. It has been home two six recorded supernova explosions over the past thirty years, with SN2022ewj being the latest (visible as the bright star just above the galaxy core.) NGC 3367 is also thought to be home to a super-massive black hole of around 15 million solar masses. 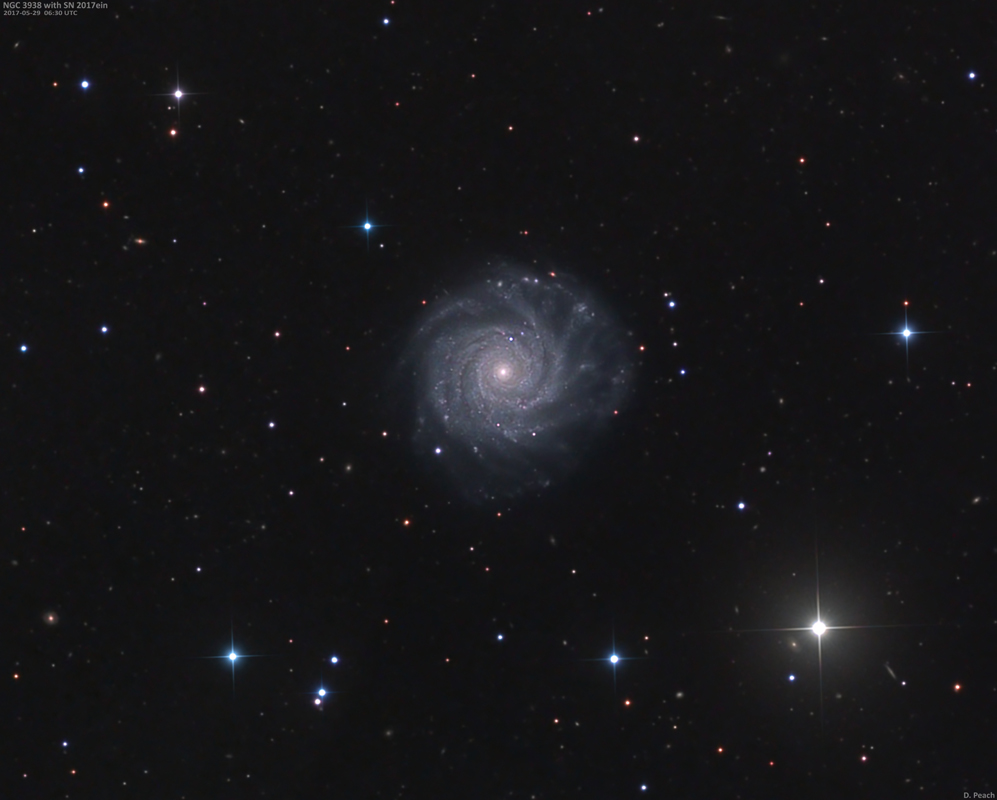 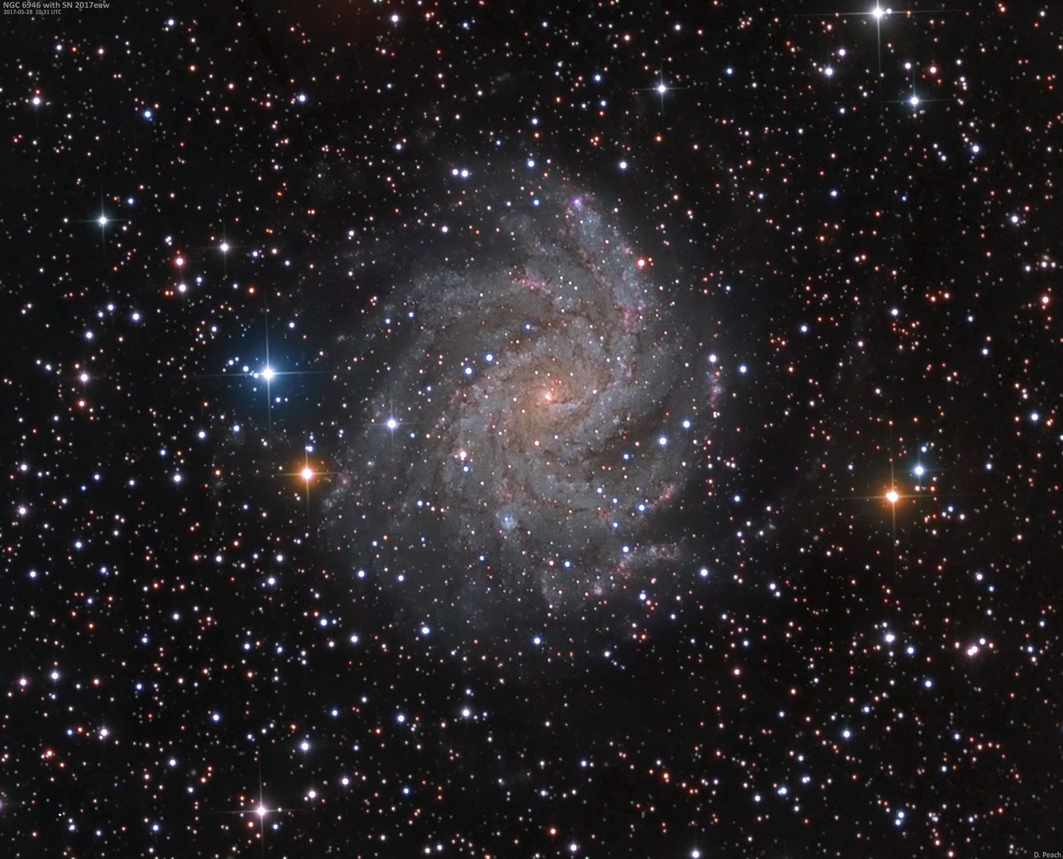 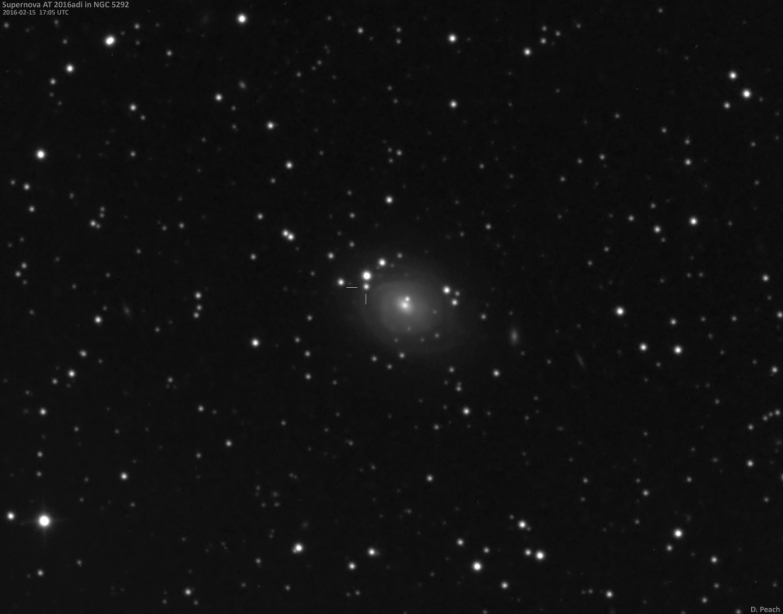 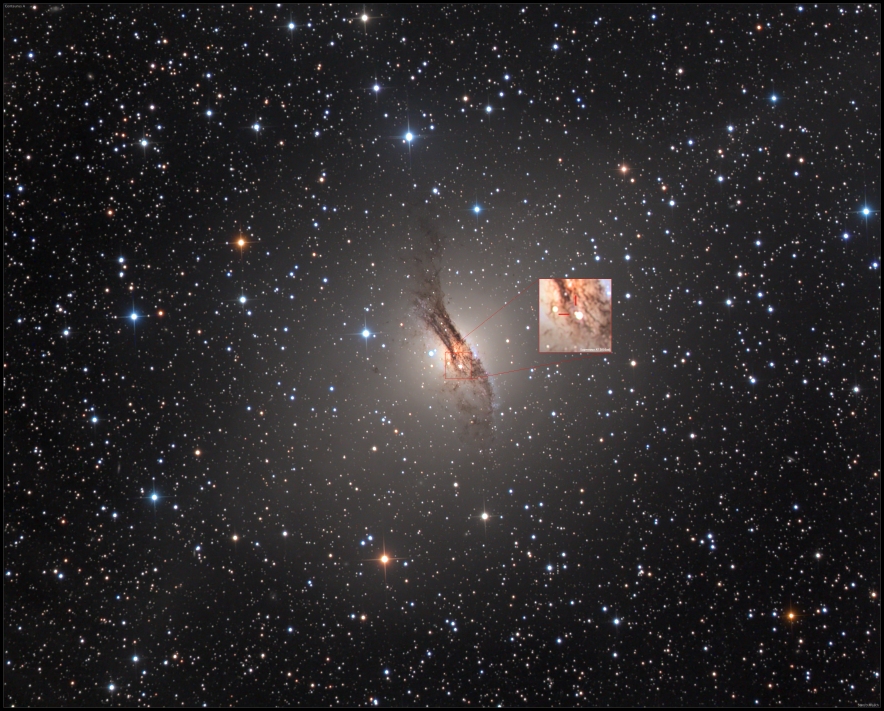 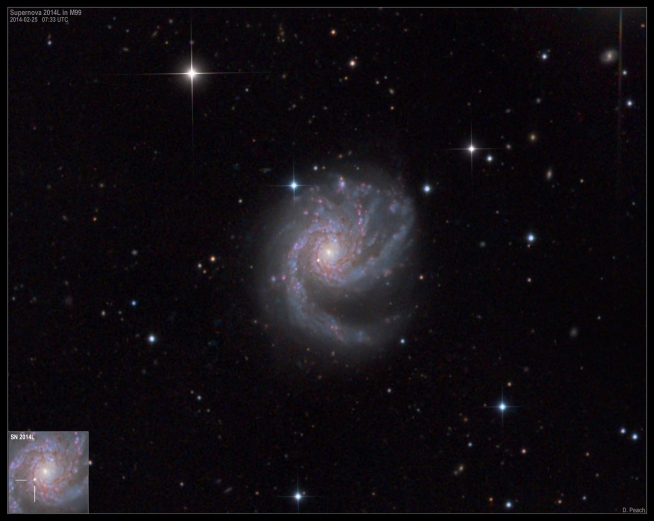 Supernova 2014L in Messier 99. This supernova was discovered on Jan 26th within the bright face on spiral galaxy M99 in Coma Berenices. This supernova is rather fainter than the one in M82 being only 15th magnitude, and already fading. M99 is far more distant than M82 being around 50 million light years away from us (meaning of course this star actually exploded ~50 million years ago and the light has taken all of this time to reach us.) 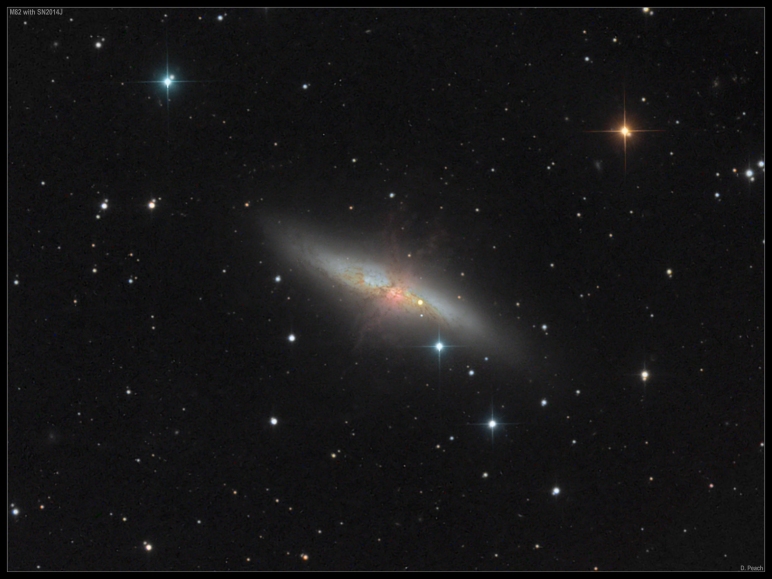 Messier 82 is an active starburst galaxy 12million light years away in the constellation Ursa Major. Back in late January a new star was discovered in this galaxy (from right here in the UK at UCL.) This star (seen here as the prominent orange coloured star just right of the galaxy centre) is the result of a type 1a supernova explosion. This is the nearest and brightest such event to have been seen in some time and is easily visible in small telescopes. 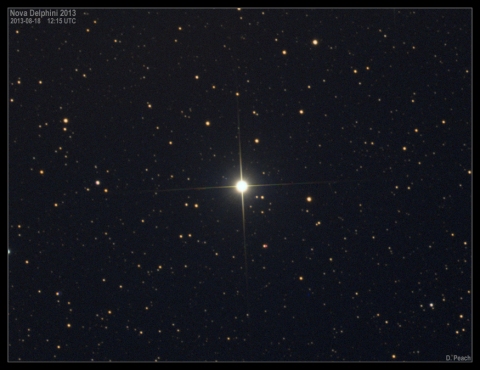 Nova Delphini 2013. This new bright nova discovered on August 14th is the brightest seen since 2007. It is easily visible in binoculars and still perhaps just within naked eye visibility from very dark sites though is fading. Although it appears as a single star its actually a binary system and the massive outburst in brightness is the result of material being drawn off a larger giant star onto a dense white dwarf companion which builds up until a massive explosion occurs - in this case resulting in a 25000 fold increase in brightness! 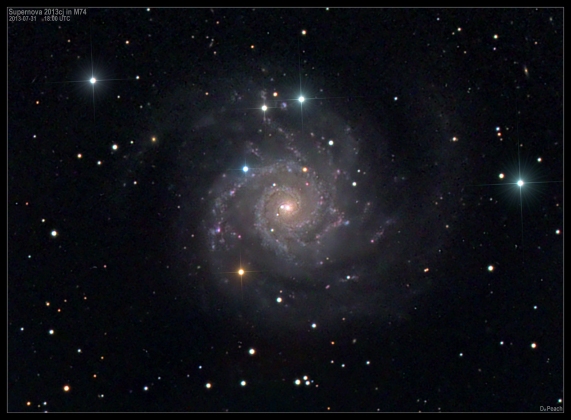 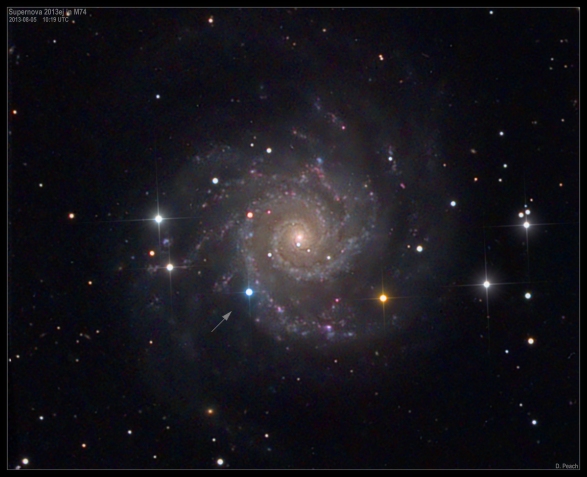 Bright supernova in spiral galaxy M74 in Pisces. Discovered on July 25th by the LOSS. This 12th magnitude supernova is an easy object in modest size telescopes, M74 is a well known spiral galaxy 32 million light years away in the constellation Pisces. 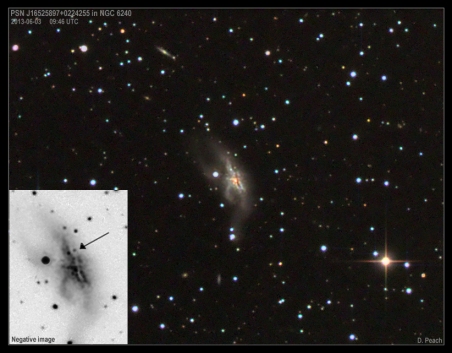 Supernova in peculiar galaxy NGC 6240. Discovered by Adam Block on April 11th. Its still present though must be around 18th to 19th magnitude. This peculiar galaxy is the result of a merger between galaxies resulting in this chaotic appearance. The galaxy itself is 400 million light years away in the constellation Ophiuchus and glows fairly dimly at 14th magnitude. 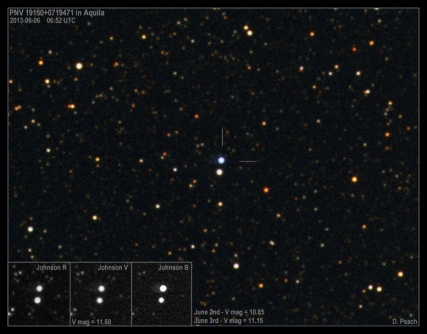 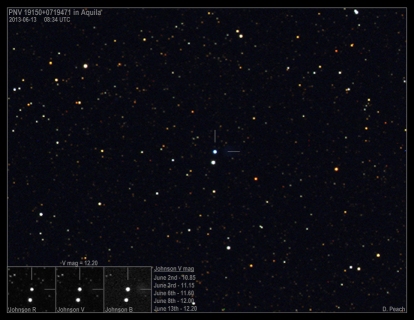 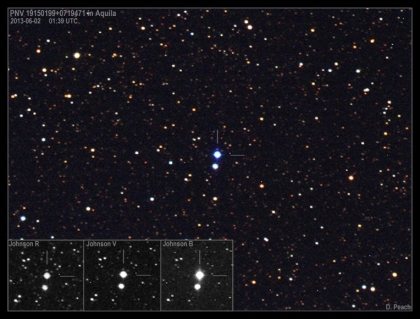 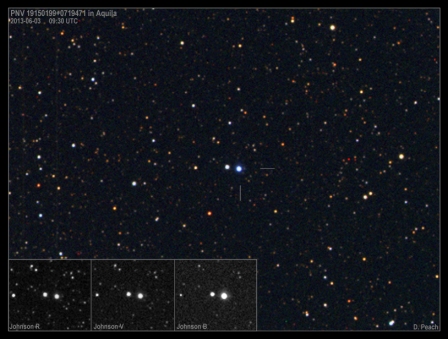 Discovered on May 31st, 2013 this new 11th mag nova suspect is easily visible in small telescopes presently displaying a notable blue colouration. It is thought to be a dward novae of the WZ Sagittae type. 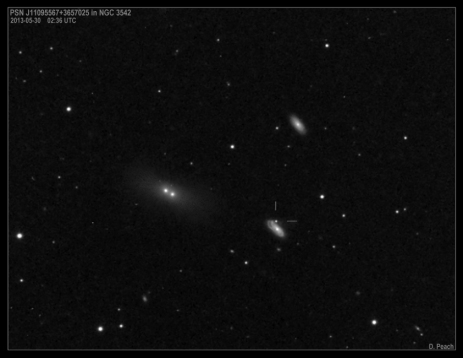 At the time of this image this supernova suspect remains unconfirmed via spectra. Discovered by British observer Ron Arbour it is located in NGC 3542, a remote spiral galaxy in the constellation of Ursa Major. The galaxy itself is 400 million ly away and the supernova itself around 17th magnitude. 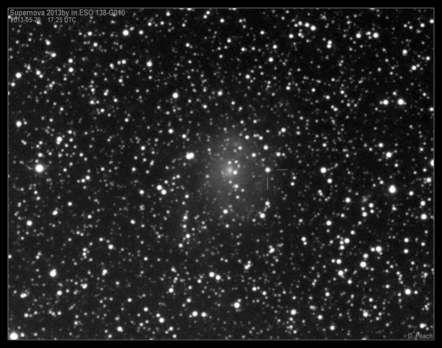 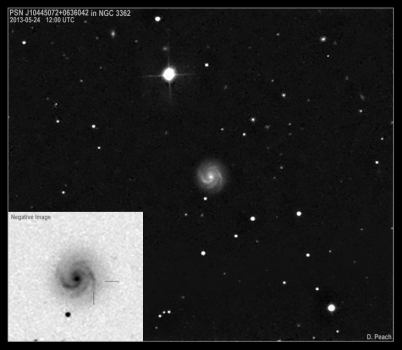 Another supernova suspect that remains unconfirmed via spectra. This one however is very faint at 20th magnitude and barely detected. NGC 3362 is a distant spiral galaxy 360 million ly away in the constellation Leo. 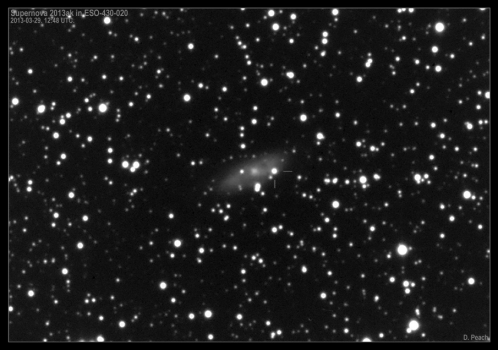 Located in the constellation Puppis this Supernova is quite bright at the moment at magnitude 14 meaning it is visible in a 25cm telescope in good conditions. The galaxy itself is quite faint around 15th magnitude and appears to be a spiral galaxy viewed at an oblique angle. 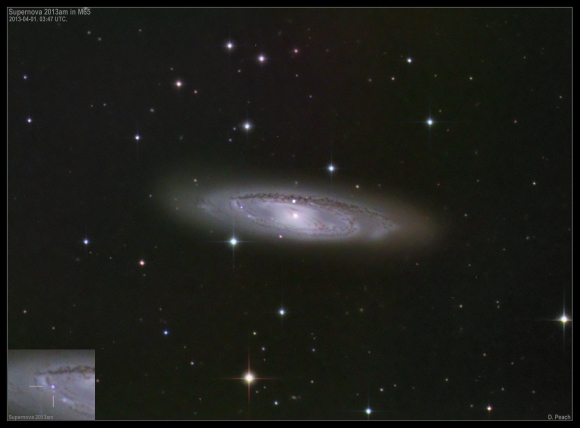 This bright spiral galaxy in Leo is currently host to a rather faint supernova seen in the cutout at bottom left. Despite this being a rather nearby galaxy at "only" 35 million light years, lots of dust in the galaxy itself is thought to be to blame for this being fainter than what one expect in a nearby galaxy. It forms a well known trio with nearby galaxies M66 and NGC3628. 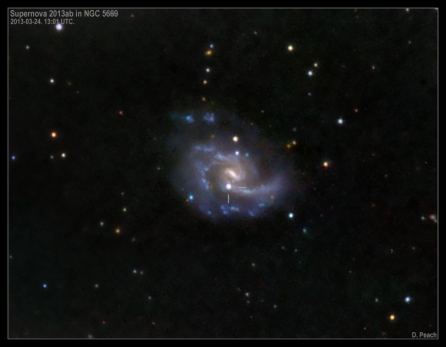 This fairly bright supernova was discovered back on February 17th by the Lick Observatory Supernova Search. In the above image it appears as a 15th magnitude star just below the galaxy nucleus. NGC 5669 is around 60 million light years away and located in Bootes. 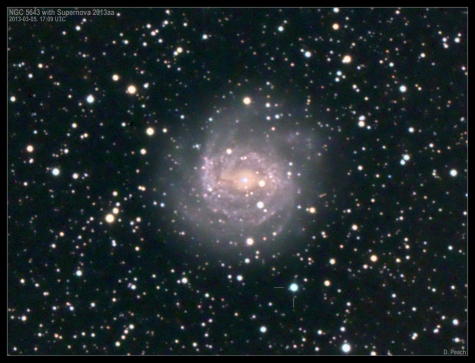 Supernova 2013aa (marked with cross hairs) in galaxy NGC5643. This spiral galaxy is 34 million light years away in the constellation Lupus. This new star appeared last month and although being incredibly distant it can be seen even in small telescopes. This supernova is the fifth brightest to have been seen since supernova 1987A in the Large Magellanic Cloud.

Copyright © 2003-2013. www.damianpeach.com. No material used within this website may be used, amended or distributed without the consent of the webmaster.