What colour is Mars?

A Practical Guide to improving your Mars imagery. 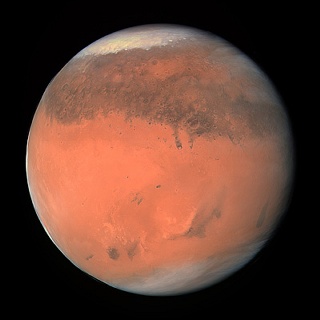 Mars from the Rosetta Spacecraft on Feb 24th 2007. This true colour view is probably very close to the actual colour of a dust free Mars. Courtesy ESA.

Just what colour is Mars? The simple answer seems Red since it is so well known as the Red Planet. Both Amateur and Professional results constantly portray a Martian disk of different colour. Some show a weakly coloured pink globe while others show a rusty coloured surface. What causes these variations, and more specifically what are the causes and effects of popular amateur techniques in imaging the “Red Planet”.

Fig 01. The varying colours of Mars portrayed in modern imagery. But which is closest to the truth? Images courtesy David Tyler & STScI.

Through the eyepiece of a large telescope, to my eye Mars (when the Martian atmosphere is free of dust) has a rusty orange coloured surface similar to what the famous ground based imagery of the rovers show, but few amateur or professional images seem to portray well this colour, or indeed accurate colours/contrasts of the Planet in general. In this guide I will try to provide a more accurate and thoughtful approach to rendering Mars “closer to the truth” and hopefully provide others with the motivation to try different techniques to render a more accurate picture of the R ed Planet.

There are various well known techniques for producing colour Mars images employed by today’s  amateurs. Here is a brief rundown of them.

RGB: Taking separate images through Red, Green and Blue filters and combing those three images into a colour image.

IR(G)B: Taking an IR and Blue image and “synthesising” the Green image from the two.

RRGB or RR(G)B: Using a normal RGB or R(G)B image and then replacing the luminance data with a more highly contrasted Red light image.

The above listed techniques are at present the most popular approaches to imaging Mars with amateur equipment. All yield rather different looking images as you can see in this comparison set below:

The R(G)B technique for producing Mars images is very popular and indeed I have used this method myself for many of my own images. But how accurate is this in rendering the true colour of Mars? Some may say that since there is no green coloured areas on Mars taking a true G filter image is rather a waste of time, and just creates even more processing work. But when we carefully examine a true RGB image and an R(G)B image of Mars we can see that they do not look the same. Tones of colour shading rendered in the true RGB image are missing from the R(G)B image.

Fig 03. True RGB vs RGB. Notice the colour tones rendered in the true RGB image that are missing from the R(G)B image particularly the brick red colour area around the North Polar Hood. Also notice the differences from the true G image to a synthetic G image. D. Peach.

With some care R(G)B images can produce very aesthetically pleasing results and the overall colour tone rendered can be pleasing, but there is no question that a true G image contains tonal information that is simply not reproducible by synthesising a Green image from Red/Blue and for this reason we must conclude that true RGB is the preferred approach if we wish to render the colours of Mars accurately.

A very popular approach with today’s amateurs is using the well contrasted Red filtered image to use as luminance data in a colour image to give a better contrasted colour view of Mars. But how accurate is this technique, and what are the pitfalls?

Firstly lets remember something very important – Mars has an Atmosphere! By using Red or worse IR filtered imagery as luminance data for a colour image produces a completely false picture of both the colours and contrasts of disk. The Human Brain loves contrast, and it’s very easy to fall into this trap and forgetting Mars does not really look like the images are portraying. If we look at this comparison below the differences are very apparent indeed: 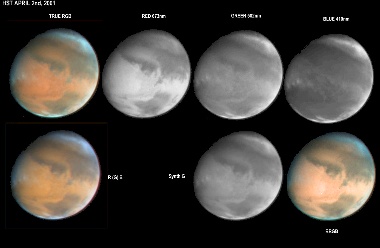 Fig 04. Red Luminance RGB (Bottom Right) vs True RGB vs R(G)B (Top and Bottom Left.) We can clearly see that the contrasts and colours portrayed in the Red Luminance RGB are completely false. Mars has become pink, and the albedo markings have become much to contrasted. Also note the loss of cloud details due to using the Red Luminance. Images HST 2001.

RRGB and IR(G)B have become popular primarily through a trend of many people using this method to overcome inadequate seeing. While it does produce a well (and perhaps over) contrasted view of Mars the colour and atmospheric details have been lost to a large degree. The difference with true RGB and also R(G)B is stark, and to my eye using a Red/IR luminance does not produce a pleasing image neither from an aesthetic viewpoint or a scientific one.

Here we compare all of the above techniques, but first lets just take a look at each separate colour filtered image and comment on what is being recorded:

Green Light: Shows both the surface albedo markings and atmospheric features such as clouds. Note the albedo markings can often have different shapes in this wavelength compared to Red Light due to it penetrating less to the surface than Red. Important for accurately rendering the colours of a colour image to the highest accuracy. Also important for rendering accurate colour of active dust events (which usually appear distinctly yellow.)

Blue Light:  Shows the atmospheric features of Mars most clearly. Clouds and hazes are very apparent while the surface albedo features are largely suppressed. Hard to obtain images of very good quality in this filter due to atmospheric scattering and atmospheric seeing.

When we look at each image individually its clear that each filter has an important role to play. Here are more detailed comments on the popular techniques described above with the pros and con’s highlighted:

RGB: Straight Red, Green, Blue imaging. Produces the most accurate rendition of colour tones and contrasts in the final colour image. Harder to balance the colours accurately if you lack experience. More time consuming than R(G)B and more processing work. Also doesn’t seem to work so well in poorer seeing due to Green being affected by atmospheric seeing.

R(G)B: Synthetic Green generated from Red/Blue average. Produces pleasing colour images and is perhaps the second best technique to employ. Less time consuming than RGB and is easier to achieve a pleasing colour balance. However is less accurate than RGB in rendering the true colour of Mars, and certain colour tones and shading are completely lost.

IR (G) B: Same as R(G)B but IR image used instead to generate synthetic G image. Produces a good colour image though the contrasts of the albedo markings are exaggerated and it is also quite difficult to produce a reasonably accurate colour balance. Increased exposure time with IR meaning slower frame rates or noisier images, especially with smaller apertures.

So which technique is the best one to use?

Under ideal circumstances of good seeing and transparency the true RGB approach is really the winner. It undoubtedly produces the most accurate colour rendition of the Planet and also produces an accurate balance between albedo detail and atmospheric detail. In poorer seeing the R(G)B approach seems better simply because the G image can be badly affected which can be frustrating especially if you’ve managed to secure a quite good red light image. Its also not much fun processing lots of poor sequences, so more from a practical standpoint I prefer the R(G)B approach in this respect. The Red Luminance approach however I recommend avoiding. It simply does not re-produce an accurate picture of the Martian disk, and using this technique in bad seeing will not help since the colour is impossibly skewed away from the truth. At least with R(G)B we can come reasonably close to reality. The Red/IR luminance technique has undoubtedly become so popular simply because all of the “exciting” small scale detail lies in the red image and we often want it to show through in the colour image as much as possible, but this simply is not doing Mars justice and atmospheric details are sacrificed in exchange for more contrasted albedo details. 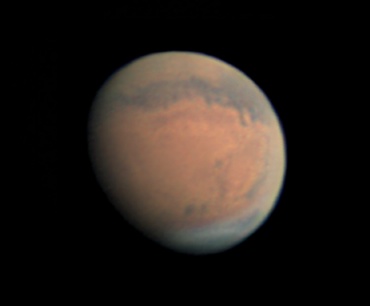 Mars is a rather more colourful world than one may think. The rusty desert areas often contain regions of varying colour and albedo, and the only way this can be accurately portrayed is through true RGB imaging. It may seem more work and one may argue that the R(G)B result is close enough, but to produce the true ruddy colour Mars with an accurate balance between albedo/atmosphere that is often apparent at the eyepiece one must use the true RGB technique.