A guide to making the most of the closest opposition of Jupiter in over 40 years.

By Damian A. Peach 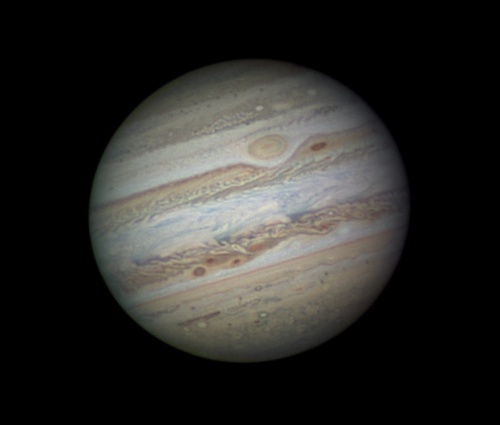 Jupiter in September 2009 showing a wealth of details across its disk. D. Peach.

Jupiter is a Planet that can look detailed, dramatic and large in the telescope on almost any occasion but the coming opposition of September 20th, 2010 sees an especially grand show for observers. Around every 12yrs Jupiter comes to a perehelic opposition where the apparent size of the Planet appears especially large as seen from Earth.

2010 see’s a particularly close approach of the Planet – the closest since the opposition of Oct 7th, 1963. Below is a table of recent and future oppositions:

The Planet attains its maximum apparent diameter of almost 50 arc seconds on September 20th when it shines in the constellation of Pisces at a brilliant mag –2.9. Its near neutral declination means the Planet is well placed for both northern and southern observers, though will still be a little low from very far northern or southern locations.

A World of Storms

Jupiter is by some margin the largest Planet in the solar system, large enough to swallow more than 300 Earths within its massive volume. A world of endlessly churning storms, its dynamic and colourful atmosphere has long been marvelled at by observers dating back to the famous spot seen by Cassini back in the late 1600s.  Its four famous Moons (Io, Europa, Ganymede and Callisto) in their own right fascinating worlds, and are prominently seen circling their master even in binoculars.

Jupiter itself is circled by bright zones and dark belts. The zones and belts contain many types of differing and ever changing meteorological features. The most prominent features are the North and South Equatorial Belts (NEB and SEB) but by far the most famous feature is of course the Great Red Spot (GRS) a massive storm twice the size of Earth, and at least 200yrs old. Another prominent feature is another large storm known as “Oval BA”. This large storm formed from the merger of three large prominent large white ovals between 1998 and 2000 and even became a smaller red spot of its own in 2006, and though its colour having faded for a time, at the time of writing this feature has once again become a prominent orange colour. Other more dramatic events can occur such a fading and revival of the South Equatorial Belt which is covered in more detail later in this article. 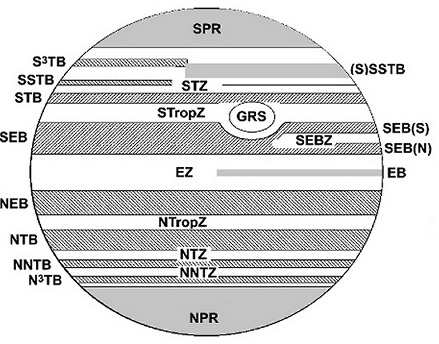 This diagram shows the Belts and Zones of Jupiter and their respective designations. Courtesy J. Rogers

During the previous Jovian apparition in 2009 an unexpected impact event occurred on the Planet, leaving a dark scar near the southern polar region, very similar to the impacts that occurred during the famous Shoemaker-Levy 9 impacts in 1994. Though the scar has now faded It’s a great example of the surprises Jupiter can throw up.

For many years the proven and best way to record the Jovian atmosphere was by making visual drawings of what could be seen at the eyepiece. But what can the observer except to see on Jupiter? The answer to this of course isn’t a simple one, but in general a considerable amount can be seen on the Planet and this opposition presents as especially fine opportunity for users of small telescopes.

A 15cm (6”) reflector or 10cm (4”) refractor will reveal all the major dark belts and bright zones, as well as features such as the Great Red Spot and wispy Festoons. If such apertures are of a high quality optically, far more than this can be seen, and on the very best nights such scopes may even begin to show to much detail as to make sketching it all difficult.

Those with larger telescopes in the 20cm + range Jupiter reveals a tremendous wealth of fine detail, and a good 20cm reflector or 15cm refractor will provide a lifetime of wonderfully detailed views. It should of course be noted, that the highest quality optics the observer can obtain are highly desirable for any planetary observing or imaging projects. 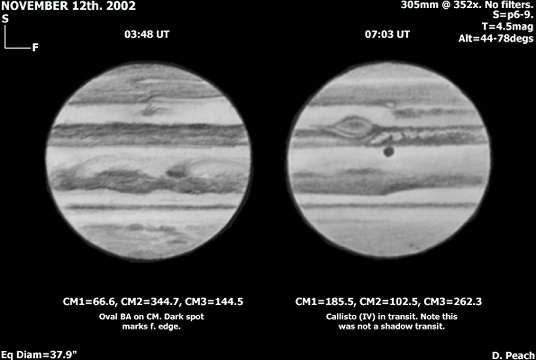 Two drawings of Jupiter by the author on November 12th, 2002. Much detail is visible over the disk, and all relevant information is included on the observation. D. Peach.

I highly recommend the use of coloured filters for observing Jupiter. These can be easily obtained from many suppliers. For Jupiter the most useful filters for the visual observer are Red and Blue. Smaller scopes (less than 20cm aperture) may prefer Orange or Light Blue. Filters worth considering are Wratten #25 (Red), #21 (Orange), #38A (Dark Blue) and #80A (Light Blue.)

As well as being a fascinating target for the visual observer, Jupiter today is a prime target for modern technology. CCD cameras and Webcams are providing us with views of Jupiter in such extraordinary detail, that the finest amateur imagery even approaches that taken by the world’s largest mountain-top observatories. Such images in recent years have allowed detection of jestreams on Jupiter only previously recorded from spacecraft imagery and the following of the general meteorology of the Jovian atmosphere in unprecedented detail. Even small amateur telescopes equipped with a webcam can produce detailed imagery.

The best tool for imaging of the Giant Planet today, is the affordable webcam. This allows real-time viewing of Jupiter on screen, and the imagery produced from high quality webcams currently stands as the best imagery of the Planets ever produced by amateurs.

The most popular cameras in use today are the DMK and Lumenera series of high speed video CCD cameras, though excellent lower cost alternatives are available such as the Phillips Toucam and SPC900 which can be obtained second hand fairly easily for around £50.

Using such cameras its possible to take detailed images fairly easily. Either a full colour camera can be used to produce colour images, or one can use a mono camera and use different filters to bring out different details on the Planet, very much in the same way as visual observers use filters in the same way. 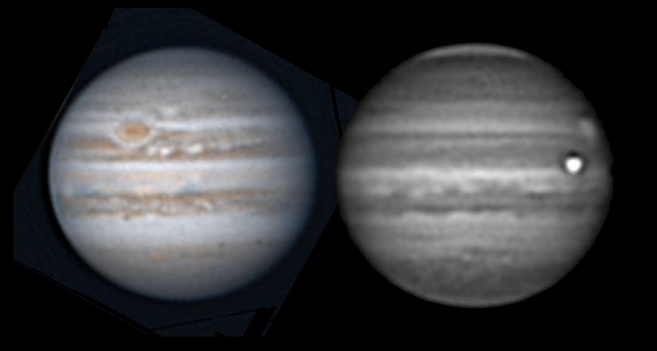 Two rather different images of Jupiter both by the author. Left, May 12th, 2004 showing a colour view using a modest 15cm telescope and Philips Toucam. Right. An image from 2009 through a 889nm filter showing methane absorption levels within the Jovian atmosphere. D. Peach

The great thing with mono cameras is it allows the use of specialised filters such as IR and UV filters. IR filters are especially useful to help produce images in poorer seeing conditions or when the Planet is lower in the sky.

Free software is widely available for processing the imagery obtained from webcams. Registax is probably the most popular piece of software and is available for free download online.

The 2009 apparition of Jupiter ended on a very interesting note, as the South Equatorial Belt (SEB) had largely faded from view. The Great Red Spot (GRS) had also become more prominent, and these events are the precursor to one of the most dramatic events that can occur on Jupiter – The SEB revival.

This dramatic event sees the faded SEB dramatically and often violently restored to prominence by the eruption of bright and dark material from a brilliant source region within the belt itself. Dramatic dark and bright spots rapidly spread from the source region around the Planet on the northern and southern jetstreams of the SEB and over the course of a few months restore the belt to a prominent darkened belt.

During the revival the SEB present a very turbulent and stormy appearance, apparent even in smaller telescopes. The 2010 apparition sees a significant chance of a revival occurring as at the time of writing the first images of Jupiter after Solar conjunction show the SEB to have faded even further from imagery before solar conjunction. The revival could occur at anytime, and possibly with the Planet near opposition which would make for a memorable sight. 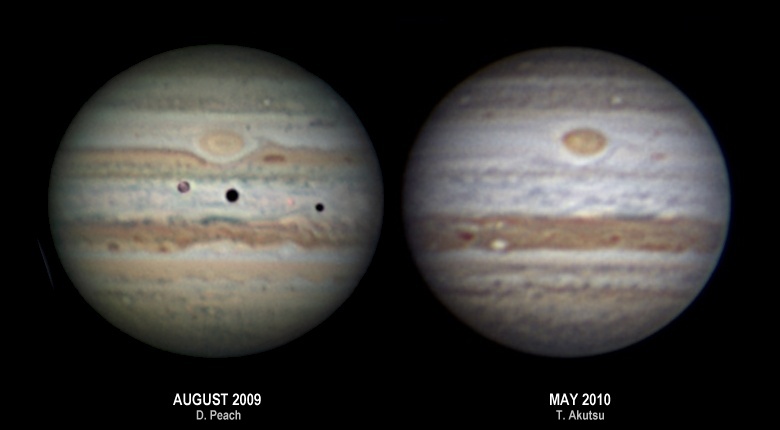 Jupiter in August 2009 and May 2010. Note the dramatic changes that have occurred such as the faded SEB and darkened GRS. Left: D. Peach. Right: T. Akutsu.

While the SEB has faded away, the North Equatorial Belt (NEB) has become very dark and broad. Through the telescope it is by far the most prominent feature on the Jovian disk at present. Of course the famous Great Red Spot is always on view, and with the SEB having faded it appears especially prominent, appearing as an intense orange coloured oval visible even in small telescopes.

Where to send you Images & Observations.

Observers should consider sending their visual drawings and CCD images to the British Astronomical Association (BAA) and Association of Lunar & Planetary Observers (ALPO.) for analysis. Observers can find all the relevant information on these organisations activities on their web pages which can be found at the end of this article.

With each submitted observation or image one should include relevant information such as the accurate date and time of the observation, as well as other details such as the instrument and filters used.

Jupiter is without doubt one of the most dramatic sights the night sky has to offer. Its ever-changing face is always a dramatic and colourful sight. The coming opposition of September 2010 sees Jupiter attain an apparent size in the telescope larger than in many years, and observers using telescopes of all sizes have a real chance to enjoy the giant planet at its very best.