By Damian A. Peach. 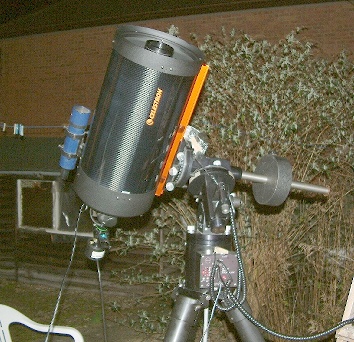 Fig01: The author’s C9.25 telescope on German Equatorial Mount read for a night of planetary photography.

Celestron’s mid-aperture Schmidt Cassegrain is a well known (and regarded) telescope among the worldwide community of amateur astronomers today. It isn’t hard to find reviews praising this telescope for its excellent performance. But is this reputation a justified one?. Is it really the Schmidt Cassegrain to beat them all?. In this review I will examine this telescope (of which I have used throughout the 2004-05 Planetary apparitions) in detail covering many issues. As well as examining the telescopes from a visual eyepiece viewpoint, I will also include some examination of the telescope from an objective viewpoint through the use of MTF graph analysis.

I have owned two C9.25 SCTs. The first during late 2004 into early 2005, while the second, from September 2005 to present day. The First was the C9.25 XLT version with Carbon Fiber Tube, while the second the C9.25 Starbright coated version (which I currently own.) and have had ample opportunity to evaluate this telescope under excellent conditions, as well as against many other telescopes also.

About the telescope – brief overview.

The 9.25” aperture Schmidt Cassegrain is the second largest of Celestron’s main range of Schmidt Cassegrain Telescopes. The clear aperture is 235mm (9.25”) with a 35% Central Obstruction (by diameter.) The OTA is available in two versions: Starbright coated, and Starbright XLT coated versions. Also the observer has the choice of OTA material either. Aluminum or Carbon Fiber is available, and as mentioned above, I have owned both versions.

While available in various packages as a complete telescope, this review focuses on the Optical tube assembly itself. This is available in the USA for around $1300-$1500 depending on which version of the OTA you choose. The OTA is shipped in an excellent double strength cardboard box with molded Styrofoam inserts. This really protects the OTA from incurring shipping or transport damage, and I’ve tested this with more than one overseas trip with the telescope.

The telescope differs slightly to many other SCTs in that it utilizes an F/2.5 primary mirror, instead of the typical F2 primary. This has been touted as perhaps one reason as to why the C9.25 has such a good reputation – longer focal length primary mirrors are much easier to figure to good accuracy. I will cover more on the optical performance later on in this review. As with all other SCTs the C9.25 focuses by moving the primary mirror. Image shift is quite minimal, but there is some present. The focuser is smooth and operates without any problems. The rubber grip knob is a particularly nice feature as this is easy to grip with cold hands.

Collimating the telescope is accomplished by three small screws in the secondary mirror assembly. Collimation movement is smooth and easily accomplished. Of most note however, is the collimation stability of the telescope, and this deserves a special mention. Unlike so many other SCTs I’ve used over the years, the C9.25 does not suffer from frequent loss of collimation with large changes in the OTA position (such as when swapping the OTA from one side of the mount to the other on a German mount.) Tests I carried out at around 500x, showed no loss of collimation at all when changing the OTA across the meridian. The advantage of this is really enormous, and unlike larger SCTs (such as the 11” and 14” models) collimation is much more stable and firm, meaning for example longer periods of Planetary imaging/observing need not cease for 20 minutes while the telescope is re-collimated when the object crosses the meridian!.

The telescope can be mounted on a variety of mounts. I have tested the OTA on both smaller and larger mounts, and while the smaller Vixen GP style mounts can hold the OTA quite adequately, provided the wind speed is low, when mounted on larger mounts, such as the Losmandy G11 or AP900 the OTA is a rock solid platform for any observing or imaging task. The OTA is supplied with either the GP/EQ5 size dovetail, or Losmandy G11 fit.

Optical performance – What the MTF shows.

Before I examine the performance I can report from experience of the Celestron C9.25, I want to briefly examine the theoretical capabilities of such a telescope. By the use of the “all seeing” MTF graph, we can truly and accurately examine the likely performance of a given optical system.

Modulation Transfer Function (MTF) is the scientific means of evaluating the fundamental spatial resolution and contrast performance of an optical system, or components of that system. A more detailed description of what MTF is with image examples can be found at this link: 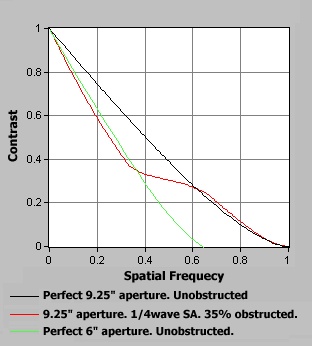 The C9.25 consists of a 235mm aperture obstructed by 35% (percent of diameter.) Many may this that such a system is not a favourable choice for Planetary observation, but the MTF graph shows otherwise. The graph below shows three different systems:

As we can see, the typical C9.25 gives excellent performance in the high frequency detail (such as the lunar surface or Saturn’s rings) and is very slightly superior to the unobstructed aperture, but had reduced performance in the mid to low frequency areas (such as the detail in the Jovian atmosphere.) It must be stressed though the differences represented on the graph are quite slight, and only under excellent seeing conditions would the differences be truly realized. The green line shows a perfect, unobstructed 6” (15cm) aperture. We can see that the C9.25 would have a significantly better performance in the high frequency detail, and around equal performance in the mid-low frequencies. Of course it must be stressed that these points apply to a perfectly collimated and focused telescope under perfect seeing conditions (the first two points being mandatory for any serious Planetary observation!.) Of course the C9.25 with its larger aperture would be more affected by the seeing than the 15cm aperture, and a significantly less number of nights would be experienced where the telescope could perform to its theoretical limits.

Here I will report some of my own observations of the quality and performance of the C9.25 telescope, and later comparing it to other telescopes, Since my primary interest is Planetary observation and imaging, I have been able to use the telescope on several nights of excellent seeing during the 2004-05 apparition and have seen what the telescope is really capable of showing.

The OTA is always kept outside close to ambient temperature to assure the observing can begin quickly if needed (such as later in the Planetary apparitions when the Planets are high up at sunset.) When completely cooled the C9.25 reveals an impressive star test. The first OTA I owned (the XLT Carbon Tube version) gave a test I estimated to around somewhat better than 1/4wavefront ptv quality. The second OTA (which I currently own) however gives an even better star test of nearer I’d estimate 1/6th-1/8th ptv correction. Intra/extra focal patterns on this instrument are nearly identical even at higher powers. Along with my now sold C11, it has the best star test I’ve ever seen in an SCT telescope.

Stellar images at high power appear as small airy disks, with excellent contrast. I am quite sure the instrument would resolve to its theoretical dawes limit on close binary stars. Planetary views are nothing short of stunning under excellent seeing conditions. Much of my work (both visual and CCD) has been on Saturn with this telescope, but also some with Jupiter and Mars.

Since I have extensively observed and imaged Saturn using this telescope much of my comments will be directed to that object. The view, as mentioned above is stunning under excellent seeing. On Dec 11th, 2004 and January 13th, 2005 such superb night occurred here, and I spent sometime viewing that Planet at 371x. Under periods of perfect definition on these nights, the Planet is a wealth of detail. The rings show distinct color/tone variations, with brightness minima/maxima. The thin line of the Encke division at the edge of the rings can be glimpsed under perfect periods. The Globe shows a variation of belts and zone, with varying color shades, from  cream white equatorial zone, to a red/brown south equatorial belt, and various colored zones. On December 11th in particular notable green and red colored zones were observed, as well as a blue/green polar cap. The SEB shows an almost wavy edge at times. The Cassini division is glorious, and sharply defined around the entire ring system. But rather than trying to picture what the Planet looks like, the image obtained on the night of Dec 11th below better shows the glorious spectacle. 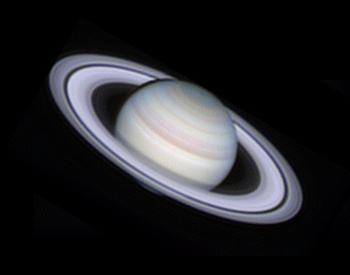 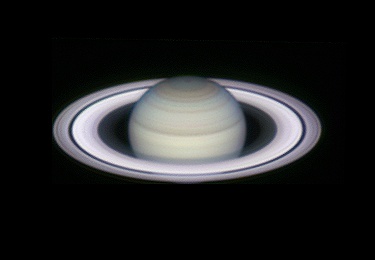 Fig 03:Images of Saturn obtained on the night of Dec 11th, 2004 and January 13th, 2005.  Seeing conditions were excellent these nights, and a great amount of detail can be seen across the Planet’s globe and ring system. Damian Peach. Celestron C9.25" SCT @ F/39. ATK-1HS CCD camera.

Jupiter is not so well placed for a detailed evaluation from these latitudes now (51N.) However some detailed views were obtained using the first C9.25 OTA during the 2003-04 Jupiter apparition while the Planet was still quite well placed. Later, tremendous views were obtained from Barbados in the Caribbean during 2005. Jupiter shows a tremendous amount of intricate detail across its face, with faithful colour reproduction at the eyepiece. Under excellent conditions detail can be seen and imaged on Ganymede. 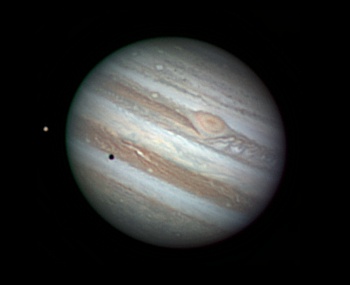 Fig 04: Jupiter as seen using the second C9.25 OTA on April 25th, 2005. Conditions were excellent during this observation, and a great amount of find detail can be seen across the face of the Planet. Damian Peach. Celestron C9.25" SCT @ F/42. LU075M camera.

From the point of those interested in using this telescope for serious Planetary observation and research programs, it will serve every purpose. It has enough aperture for the use of a wide range of filters well out of the visible spectrum such as 1 micron IR filters or UV filters, while of course being able to follow the Planets in visible light at very high resolutions when seeing conditions allow.

The telescope is also a fine performer for the observation and imaging of Deep Sky objects. Though my experience has been limited in using it in this area, I did have the opportunity to use the telescope from one of the worlds best locations, at ESO’s Paranal Observatory, in Chile. Views of objects such as 47 Tucane were incredible, with pin sharp stars at low powers. The telescope has enough aperture to shows fainter objects also, and I am sure could also produce very fine Deep Sky images in the right hands. 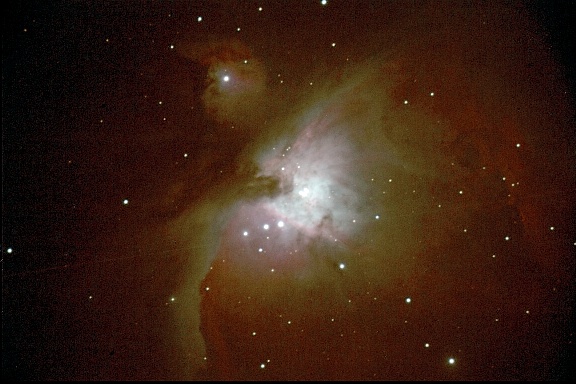 When we examine everything that makes a telescope great, there are many issues to take into account. Cost, user friendliness, optical & mechanical quality, potential performance. I think when we take into account all of these issues the C9.25 really is a rarity in today’s flooded “advertising rich” market.

There really isn’t much to say regarding this telescope. The images say it all. Before I obtained the images I have with this telescope I wasn’t of the opinion such results were possible with a telescope of less than 10” aperture. The C9.25 has changed my views, and proven it self to be a first-class performer. Visually, under excellent seeing Saturn doesn’t look any different to how it did through my excellent C11, and the images produced are as good.

When you consider the price of this OTA at $1300-1500, it really is a major bargain in today’s market. It delivers in so many areas – quality, portability, user-friendliness and flexibility. Is this C9.25s long standing reputation really a reflection in how it really performs? – Absolutely.