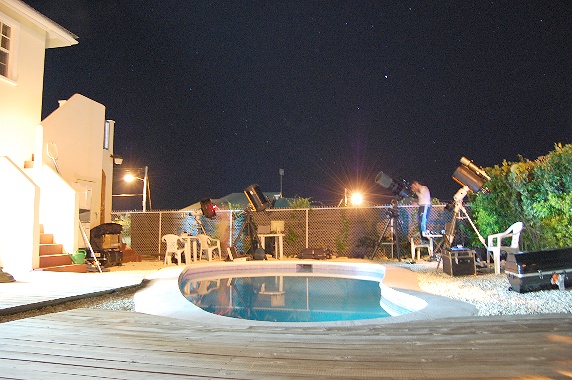 Above: Four telescopes (three C11s, and a C14) all waiting for the Red Planet to rise on a warm December night. Note Achernar in Eridanus shining above.

During December 2007 as Mars approached its close approach occurring on December 19th, a group of friends and myself travelled to Barbados to watch Mars as its best. We spent two weeks on the island, though unlike previous trips to the island, this one turned into somewhat of a nightmare.

Firstly, weather during the period was decidedly more showery than is typical for the time of year, especially during the second week, when tropical storm Olga skirted north of the island bring clouds, rain and generally very poor conditions. The trip was also beset with equipment problems, with my laptop dieing on night 7, and it was only because there was a spare PC at the rented villa was i able to continue imaging! Everyone else also had serious equipment problems, from laptops dieing randomly, to mounts not working. Fortunately, we managed to overcome all of these adversities, and personally, i produced my finest Mars work of the apparition, and also my finest Saturn imagery of the apparition.

Seeing was often excellent during the first week, with periods of near perfect laminar flow at times, though the second week was much more unsettled and poor due to the tropical storm.

Overall, i was very happy with the images i returned with, despite the many problems we faced, and it was certainly a nice escape from the bleak winter conditions at home!

Mars on December 10th, 2007. Dia=15.67". Chryse is central in the first image while Solis lacus is in the second image. Note the misty clouds surround the NPC.

Mars on December 9th, 2007. Dia=15.62". Chryse, Mare Erythraeum, Aurorae Sinus and Mare Acidalium are all we seen in these images, along with Solis Lacus at right.

Mars on December 8th, 2007. Dia=15.57". Aurorae Sinus and Chryse are well presented here with the familiar finger like projections. Note the dramatic change in cloud activity from the previous day.

Mars on December 7th, 2007. Dia=15.51". Aurorae Sinus and Chryse are well presented here with the familiar finger like projections. Again note the interesting clouds around the NPC.

Mars on December 6th, 2007. Dia=15.45". My best set of images for this apparition. Considerable detail visible across the disk. Olympus Mons is clearly defined in the Tharsis desert as a "donut shaped" feature. Note the complex clouds surrounding the NPC.

Mars on December 4th, 2007. Dia=15.32". Solis Lacus is very prominent here, with the "Y" shape of Agathodaemon/Melas Lacus etc marking the floor of Valles Marineris. Note in the last image Orographic clouds over the Tharsis volcanoes, especially Arsia and Pavonis.

Mars on December 2nd, 2007. Dia=15.17". Mare Cimmerium/Sirenum and prominent along with Propontis. Note Elyisum Mons and Hecates Tholus are seen as two small bright spots. Solis Lacus is rotating out of view with Orographic clouds over Arsia and Pavonis Mons. 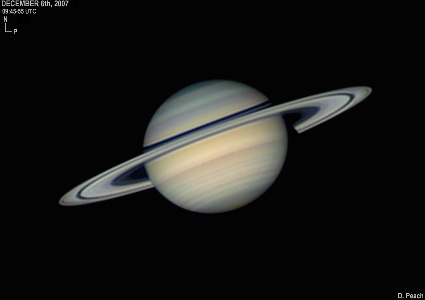 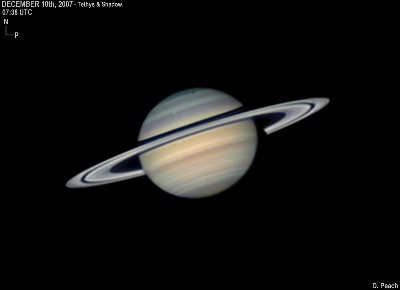 Saturn on December 10th, 2007. Note the transit of Tethys and its shadow across the northern hemisphere.